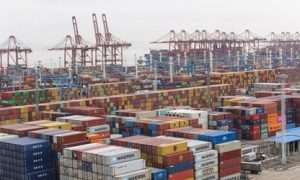 Imports from China – impacted by the Covid crisis

Imports from China – low volumes of goods and reduced maritime space, until mid-June Shanghai – is still in quarantine Shipping lines have announced “blank sailings” by  mid-June Due to the extensive Covid quarantine under which China is still located, the volume of goods available for exports from this region has decreased considerably. The shipping lines have already reduced traffic from Chinese ports, many of them announcing “blank sailings” in several Chinese ports, until the middle of JUNE. Covid-19 situation in Shanghai: Shanghai is still in quarantine, although Covid cases are declining, but control policy is even stricter now than last

Export containers – accepted in the terminals of  Constanta Port, only with maximum 7 days before the  ship arrives. Congestion surcharge  – of 500 EUR / container / day, for containers that are not picked up within 7 days from the  ship’s arrival in port. The Constanta Port is facing a major congestion, which is why, from May 5, the export containers will be accepted in the terminal only with a maximum of 7 days before the arrival of the ship. Starting with May 2, it was announced the introduction of a congestion surcharge of 500 EUR/container/day for containers that

Major congestion in Constanta port due to containers destined for Ukraine   Since the war in Ukraine began, most of the containers destined for this country have been discharged in Constanta port, which led to a major congestion of the port, both Agigea terminal (CSCT) and SOCEP. At this time there are delays in operation and delivery, for all containers, regardless of destination. The warehouses in Constanta are also congested, most of them refusing to receive goods. In the next period, in order to avoid delays and blockages in the delivery of your maritime imports, we invite you to take